Who was St. Florian? 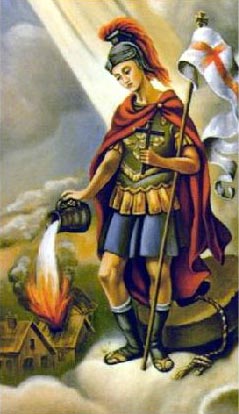 Florian was born about 250 A.D. in Cetium (now in Austria). He joined the Roman army and advanced in the ranks. However, the Emperor Diocletian was shocked to learn that Florian did not carry out his orders to persecute all Christians in the area, and, thus, was sentenced to death by fire.
Standing on the funeral pyre, Florian is reputed to have challenged the Roman soldiers to light the fire, saying “If you do, I will climb to heaven on the flames.” Apprehensive to his words, instead of burning Florian, they drowned him. His body was later retrieved by Christians and buried at an Augustinian monastery near Lorch.
fal Saint Florian was adopted as patron saint of Poland after Pope Lucius III consented to the request of King Casimir to send relics of Florian to that country. Soon after, a person was saved from a fire by invoking Saint Florian’s name. Since then, Florian has been invoked against fire and has generally been regarded in most countries as the patron saint of the fire service.
St. Florian’s feast day is May 4th.

The charism of the Society of Christ consists in serving the Polish Diaspora thorough the world. We build up the Church through the personal witness of a holy life, by spreading the devotion of the Holy Mass, administering the sacraments. [Learn More]

We the parishioners at Saint Florian Roman Catholic Parish, while preserving elements of our Polish heritage, serve Americans and immigrants of many ethnic backgrounds through prayer, example and good works.

Through the spiritual and social activities of the Parish, we seek to be a beacon to all God’s people.